Jenny is an international style and image consultant based in the North East. Think of her as a one woman Susannah and Trinny but much kinder … a female Gok Wan ….. Nicky Hambleton-Jones without the knife!“ And ….If you haven’t heard of Jenny B – you should have. She is a jewel of a speaker and makes a room sparkle by just being there.”  Janice Fellowes. Guest on Ventura. P & O.

She has been featured in many publications including “The Mail on Sunday” and “Accent”, seen on GMTV and has been dubbed the “North East’s style guru”.

Jenny also has many articles on style published, including the recent “Credit Crunch Style” for the “The Journal” and her book available in all good bookshops, online (Amazon) and also directly from herself, is receiving excellent feedback from its readers: “Style – the road to freedom: effective dressing for women.”  …  “it makes clear what has been blurry for so long and it has given me not only hope that I can find a style for me but the confidence to know that I can find it. Thank you!” J. Elliott. Brough.

So far she has travelled to venues all over England, Europe, the Mediterranean and the Carribean spreading the style word: “If we wear clothes style isn’t an option – it says who we are, what we are and where we want to be. Your own style should speak loudly and clearly, it is your outer skin and you should be entirely at one with it. Which is why Mother Theresa and Hannah Hauxwell are as much my style icons as Audrey Hepburn or Michelle Obama.”

Approached by Harvey Nichols, Dubai , unfortunately she didn’t have the time having bookings to talk style in South America and the Carribean. This summer is being spent in Cumbria (the excellent Higham Hall), the Mediterranean and Norway. From damp to hot to cold perhaps! Increasingly she is known for the wit and wisdom of her style “performances” . Her style talks are deliberately designed to entertain. Relaxed listeners take on board so much more than those whom are being preached too: “You are not a professional speaker – you are an ENTERTAINER! I so, so enjoyed your part of the day’s proceedings and just hope we meet up again as part of a similar event.” Margaret Davidson. New Bodhi, Speaker. New Bodhi, Anti-Ageing Day.

Working with individuals, small groups, corporations, charities, hotels, the NHS – in fact with anyone who wants to learn, or spread, the style word – Jenny gives others confidence in their own style choices whether it be for personal or professional enhancement: “Jenny B is one of the best colour and style analysts in the UK ..this is an opportunity for people to learn more about creating respect and confidence through personal style……the best  I’ve ever seen in this field.” Jane Anderson Wellbeing Coordinator. Dryden Centre. Gateshead.

“If we wear clothes style isn’t an option – it says who we are, what we are and where we want to be. Your own style should speak loudly and clearly, it is your outer skin and you should be entirely at one with it. You don’t get a second chance to make a first impression and 30 seconds is all it takes for someone to decide on you job, social standing, how much you earn and the sort of home you live in. Only 7% of what you say count at first meeting. The rest is down to appearance, body language and the timbre of your voice. Which is why Mother Theresa and Hannah Hauxwell are as much my style icons as Audrey Hepburn or Michelle Obama. It i why some of us are perceived to be good at what we do – without having said a word!”

And, if she isn’t talking style you’ll more likely find her at her small but beautifully formed style studio – The Style Room, in Stocksfield, Northumberland – where she gives 1-1 and small group consultations in Colour, Style, Wardrobe Management and Personal Shopping to the myriads of women, (and the occasional man!), who come to her for style and colour advice and guidance: “A good style consultant isn’t bossy or harrowing, they are there to listen and guide, enabling a client to become confident in their own choices. My advice is; if you aren’t confident in your own look and style choices, go out and find a Style Consultant with whom you can enjoy working and get it. From there, the only way is up!” 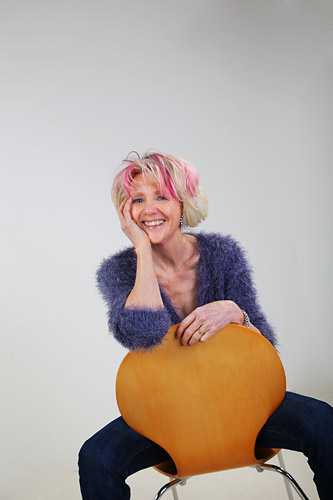